There are no contraindications for plantain. This is a first degree herb and can be used as food.

Use the fresh leaves in a strong decoction, take 2-4 oz 3 to 4 times per day by mouth. A juice may be used internally 1 fluid oz every hour and may be applied to wounds, bites, etc. and also applied to toothaches with a cotton ball, replacing the juice every half hour. As a poultice, chop fresh plantain on cutting board and place directly on wound and wrap with gauze or a cloth bandages to secure. Change every 30 minutes to 2 hours. The herbs may become warm and black and this is an indicator that the toxins are being pulled from the wound. Salve – I like to make a soothing salve with equal parts plantain, comfrey, and calendula. Add these dried herbs to any single of combination of oils such as olive oil, grapeseed or apricot seed oil in a 1:5 ratio. Let these set in a water bath at 120-140 F for 6-8 hours. Add ¼ c beeswax for every 1 cup of oil. Store the salve in a cool, dark area.

As a remedy for all types of wounds from scrapes, splinters, puncture wounds to dry out dirt and debris and to serve as an antimicrobial as well as to heal the tissue more quickly. Abscess and infections of teeth and skin. Bee stings, insect bites, spider bites and snake bites. Bell’s palsy and any facial neuralgia. Kidney weakness and as a diuretic. Scurvy. Dry, irritated cough, irritated bronchi, irritated trachea and both dry lungs as well as to draw up mucus from the lungs. Histamine reactions. To stop bleeding in wounds as well as for heavy menstrual bleeding. 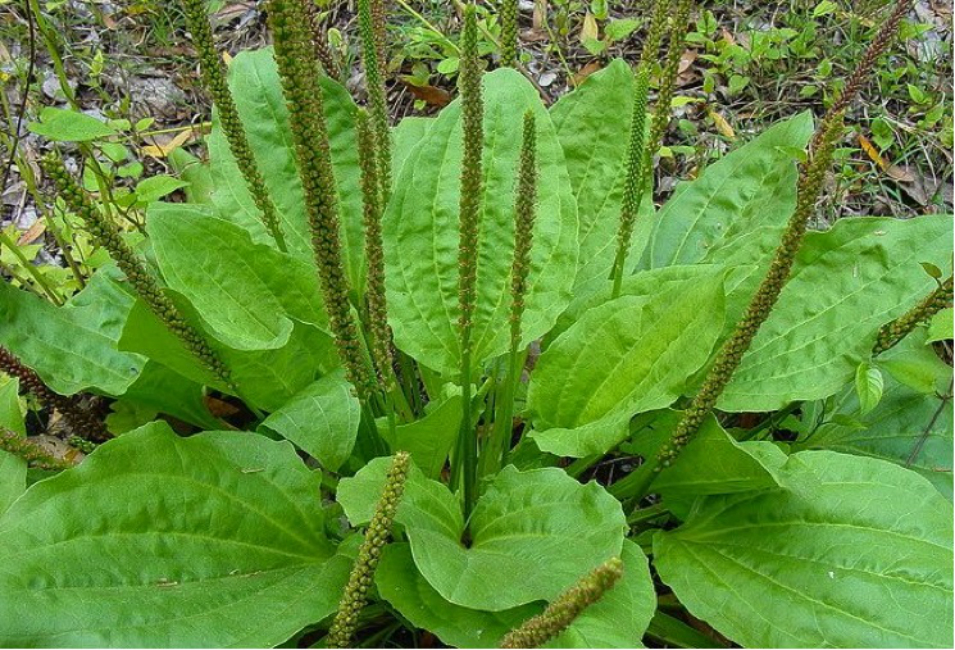 Plantain is to me a symbol of the “people’s medicine”. It is a humble herb, after all, its name comes from the Latin “planta” which means foot. This it thought to be due to its shape being similar to the sole of a foot. But perhaps it also refers to its propensity to grow on ground that has been stepped on and pounded down due to heavy foot traffic. Indeed, it does grow in abundance in places our feet have compacted the ground and it pulls nutrients deep from the earth. I often tell people that plantain is “the drawing agent supreme”. My husband had a serious break to his leg several years ago. A few weeks after the break, I noticed blood and fluid pooling under the skin in the area superficial to his tibia. I went outside and picked some plantain from my front yard and chopped it up on my kitchen cutting board. Then I took the bright green juicy heap of herbs and put it over the suspect area of his leg firmly secured with some gauze bandages. The next morning the blood and serous fluid had been drawn out of the area soaking the bandages. I did twice more and his leg was free of all fluid, leaving the area healing nicely. Plantain is also the people’s herb because it is so readily available to people all over the world and with such a broad range of usefulness. You probably have it in your own backyard. Plantain has ovate, smooth leaves which grown in a rosette. The leaves have fibrous veins running their length. In the center of the leaves sprouts a spike anywhere from 6-20 inches long with green seeds tightly clinging to the top. Plantain is often known by the term snakeweed because the seed stalk resembles the head of a snake. Native Americans used this plant to draw venom out of snake bites. In ancient India, it was observed that a mongoose bitten by a cobra would eat plantain which would neutralize the venom. It’s also a great drawing agent for bee stings, mosquito bites and spider bites, and splinters. Matt Woods uses it to draw infection and pus out of infected teeth. It is useful for wounds for several reasons. It will pull out debris. It is antimicrobial. And it is a vulnerary, encouraging the epithelial cells of the skin to renew which, in turn, speeds up wound healing. The use of plantain as medicine has a very long history. Not only has it used by people from very early times but various species appear all over the world and so it has found a place in most herbal modules the world over. It is mentioned in many literature texts from Shakespeare’s works to Longfellow’s Hiawatha. The Anglo-Saxons (450 AD to 1066 AD) recorded that plantain was one of their 9 sacred herbs. They used it for many of the uses we esteem it today such as bites of scorpions, stings, lymph gland swelling, excessive menstrual bleeding, uterine pains, headaches, coughs, and fevers. Native Americans placed the leaves of plantain on wounds. They combined it with yarrow as an astringent to stop hemorrhages in the lungs and gastrointestinal tract. They chewed the roots of plantain to relieve toothaches. Delaware Indians used plantain for diarrhea

As mentioned earlier, plantain in know as probably the best drawing agent we have in the herbal world. If there is any wound that needs drawing, this it the plant of choice. Plantain can be used on wound that have debris in them such as skinned knee and abrasions with dirt. It will pull out the dirt and debris while disinfecting area. Plantain is also a styptic, so when placed on a bleeding wound, it will help to stop the hemorraghaging. If it is taken internally, it also will help stop internal bleeding such as heavy menstrual flow. Combine it with yarrow for an even more effective styptic.Plantain is a wonderful vulnerary, promoting the healing of tissue in the body. I make a salve with plantain, calendula, and comfrey which my sister-in-law swears by. She had to have many skin cancers removed on her face with a very strong chemical cream. She states that the salve with plantain works more effectively to restore the tissue integrity in the affected area than any cream the doctors have suggested. Plantain is also a wonderful vulnerary for healing the tissue in the gut when it has been damaged. It’s cooling and moistening properties can also cool down the inflammation caused by many inflammatory gut issues as well. It combines well with calendula and aloe vera for this purpose.Due to its high vitamin C content, plantain has been known to help cure scurvy. Plantain psyllium is often used today to provide fiber to move bowels in cases of dry constipation. The seeds are very abundant in this species and are grown specifically to work a as laxative. They are very moistening and provide mucilage. The husks of the seeds are used to provide “roughage” but can be irritating to those with a more compromised gut so these should be used with caution with anyone with a hot, inflamed digestive tract. Plantago Ispaghula seed is used in India in cases of chronic diarrhea and dysentery. Plantain’s drawing agent is also helpful in cases of pneumonia when mucus and water need to be drawn up from the lungs. It is also valuable for nasal catarrh, probably due to its astringing properties. The mucilage can help moisten dried throat and tissue during a cold as well. ‍

I could find no studies performed with humans. However, a study was done on rats with an induced model of colitis. These rats were treated with a diet which included 5 grams of plantago ovata seeds in addition to their 95 grams of pulverized standard diet for rats. The histolical analysis revealed that the addition of the plantago fiber resulted in a faster recovery to the damaged gut mucosa as demonstrated by epithelial regeneration at the margins of mucosal ulcers as well as postinflammatory tissue healing in the submucosa of the tissue. 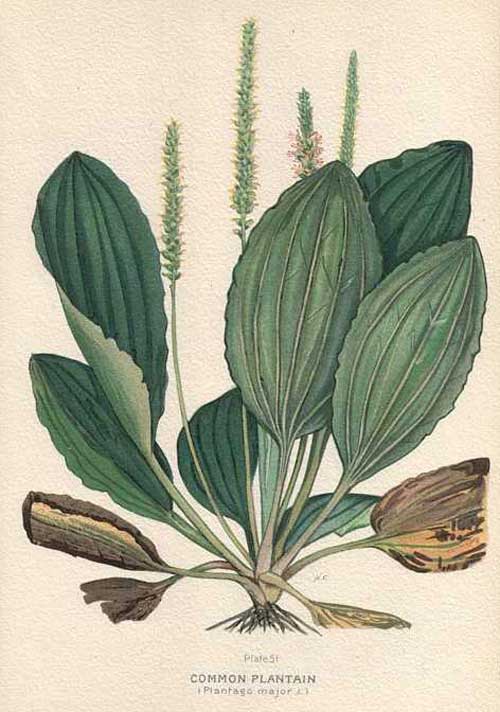