Whole plant – Leaves and stems are harvested before the flower buds open and then dried; the roots are harvested in the fall, typically the root is used for medicine

Tincture: 1-5 ml TID. For acute conditions you may use 5-60 drops per hour 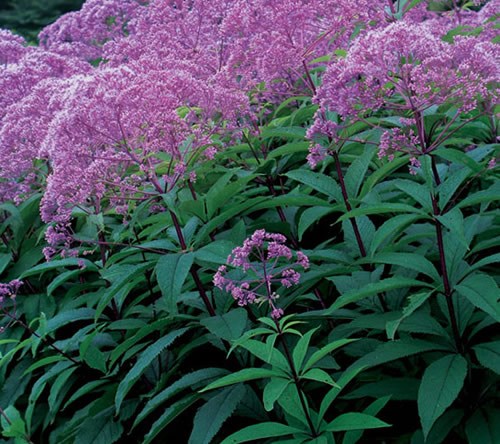 Joe Pye Weed is native to the eastern North America. It prefers to grow in swamps and wet, marshy areas. It is often found as water and soil meet where it serves as a sort of erosion control. The roots often contain nodes which resemble calcifications. This is symbolic of the plant’s ability to break up calcifications in the body. There are over 40 varieties, however, not all are used medicinally. Large purplish- pink domed clusters of small tubular flowers bloom from July to late fall and sit on top of dark green stems that grow anywhere from 5-6 feet and sometimes even reach as tall as 12 feet. The leaves are rough to touch and whorled. There are four to seven leaves per node. The e. purpureum species has a scent of vanilla. Joe Pye Weed is said to have been introduced to the early colonists by a Native American medicine man named Joe Pye or Jopi who used the plant to successfully treat typhoid fever. Traditionally, Joe Pye Weed was valued not only as a great diuretic and mineral solvent but also as an herb for the condition of putrification. This is evident by its use for typhoid fever. However, Matthew Wood describes in his book, The Earthwise Herbal, how he has seen it help with abscessing of the peritoneal tissue of Crohn’s disease (Woods 2009). King’s American Dispensatory of 1898 states that “It is a fairly good remedy in some forms of dyspepsia and chronic mucus diseases of the gastro-intestinal tract.” This gives us an indication that even in the late 19th century there was an understanding of its usefulness in treating conditions of the gastro-intestinal tract and perhaps diseases related to the peritoneal tissue. It is evident that this plant was valued in the early establishment of the United States as it has been noted in literature that early colonists grew this plant in their medicinal gardens. Additionally, it was listed in the US Pharmacopoeia from 1820 to 1842. As I went on an evening walk the other night I plucked some Joe Pye Weed blossoms. The taste was pungent, warming, and bitter. I sensed its dispersing qualities as a warming sensation permeated my mouth and a sense of being grounded came upon me. This reminds me of how we feel grounded when our kidneys are strong and robust. A wonderful gift from this beautiful plant

Joe Pye Weed has a long history of use as an effective diuretic and renal stone solvent. It has been used as a diuretic, astringent, stimulant, lithotriptic and tonic to the urinary tract. It stimulates the flow of liquids and solutes through the kidneys and is especially useful in removing kidney stones or gravel from the urinary tract. Truly, the urinary tract is where we think of how Euphorium shines. However, upon research I learned that its use is more versatile than being contained to one body system. Maude Grieve stated that it was also useful in gout, rheumatism, and dropsy. Matthew Wood attributes this to the ability of Eupatorium to keep minerals in solution, as well as its propensity to keep water in its place. Here again, I think of its affinity for growing along the edges of bodies of water to keep erosion from occurring and to keep the water where it belongs. In this, we should think beyond the urinary tract but other places where water may be out of control such as the joints, tendons, and ligaments, mucus membranes of the intestines and even menstrual irregularities. Therefore, we can also think of Eupatorium as a remedy for helping people with structural issues, such as frozen joint, sprains and strains, bringing fluids into these areas to help moisten and heal them. Kings American Dispensatory of 1898 discussed Eupatorium’s ability in cases of chronic irritability of the womb, including miscarriage due to issues such as prolapses (Felters). This again takes us to this plant’s affinity for balancing fluids. Here it is beneficial for toning the ligaments of the uterus.

I could find no studies on Joe Pye Weed 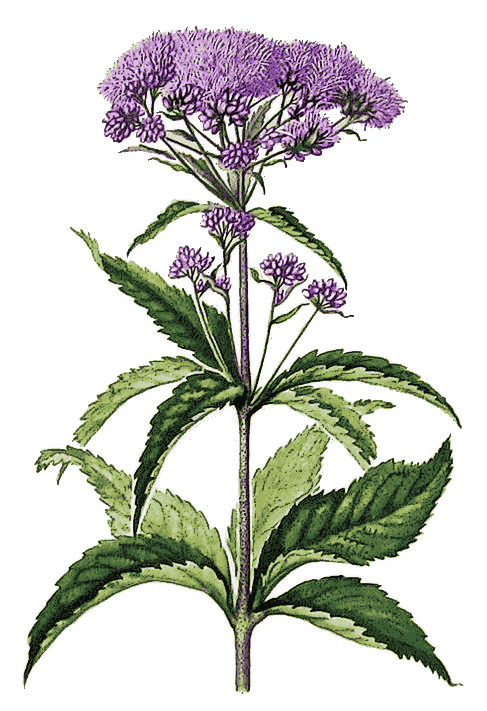