Honeysuckle is not recommended in pregnancy as promotes menses and labor. It is important to know the type of honeysuckle that you are harvesting. This is due to a difference in edible parts from species to species. One species may have edible berries, another may have poisonous berries, bark, etc. 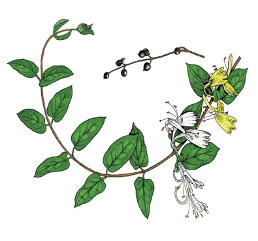 Honeysuckle is a both a vining and bush plant with over 300 species which has naturalized in the northern hemisphere throughout the world. About 100 of these species are edible of which a dozen or so are used medicinally. There is a bit of a variance between the species as to which parts are edible. In some species the berries are edible and others are poisonous. Therefore, we are going to refer to the most commonly used species of honeysuckle which is Lonicerra japonica. These species has been used in traditional Chinese medicine for centuries and is prized for its antiviral, antimicrobial and anti-inflammatory properties. Lonicerra japonica was introduced to the United States in 1806 when it was brought to New York as an ornamental plant. As early as 1898 it was reported to have escaped its cultivated use and soon after we discovered what a vigorous invasive stealth Lonicerra japonica possessed beneath its intoxicating perfumed scent. Honeysuckle twists around its host plant growing up to 30 feet tall in its preferred sunny locations. She digs her roots 3 foot deep into the earth while extending them 10 feet across as if she is just daring for us to try to uproot her. She spreads by seeds, underground rhizomes and runners in her attempt to spread her vines. I have cut her to the ground many times after unwinding her sprawling vines around the bushes in my backyard, only to find her sprawled around them again the next year. It seems we must pick her fragrant delicate petals to capture the spirit of her ambition and add it to our apothecary of medicinal herbs. It is important to not confuse honeysuckle with the American native which is poisonous. The Japanese variety we are visiting today in our discussion has leaves that are leathery and opposite with ovate shape and smooth edges. The berries are black compared to the orange-red berries of the native variety. Her flowers bloom somewhere from April to July and are a white and yellow color and run in pairs along the stem. Her vine has peeling brown bark.

Japanese honeysuckle is highly prized in traditional Chinese medicine. It is used to reduce heat, cool blood and disperse wind-heat when accompanied with fevers. It is used for the common cold, influenza and helps to sooth sore throats. It is traditionally used for it broad spectrum like properties and its ability to work as an antiviral especially with infections of the respiratory tract and gastrointestinal tract. It has an affinity for issues with the lungs, spleen and stomach. Typically, the flowers are the primary part of the plant used, however the stems and leaves are used more specifically for arthritis and joint inflammation. Honeysuckle has also been used to protect the liver. Honeysuckle is an effective mouthwash due to both its astringent and antimicrobial properties. Native Americans used honeysuckle as an antiseptic and to promote wound healing when applied to the abraded skin as a wash. Traditional Chinese medicine uses it topically to treat ulcers. Again, here we note its antiseptic, astringent, and vulnerary properties to help with these aforementioned skin issues. It is also a nice addition when making any kind of beauty treatments for the skin such as lotions and soaps. In the book The Dispensatory of the United States of American, 1918 by Remmington and Woods the fruit of Lonicera were recommended to treat asthma when used as a syrup. It also stated that “the fruit of all species of Lonicera is said to be emetic and cathartic.” John Hill in The Family Herbal of 1812 wrote “The fresh leaves of honey-suckle given in decoction, are good against obstructions off the liver and spleen; they work by urine, and they are also a good gargle for aa sore throat.”

No in vivo studies could be found. However one in intro study done an the effectiveness of Lonicera japonica extracted 24 compounds from honeysuckle and tested their anti-diabetic effects based on their inhibitory effects on A-glucosidase and PTP1B. Among these isolates, 12 of them showed potent a-glucosidase inhibition, which demonstrated the plant’s potential for significant anti-diabetic activity. 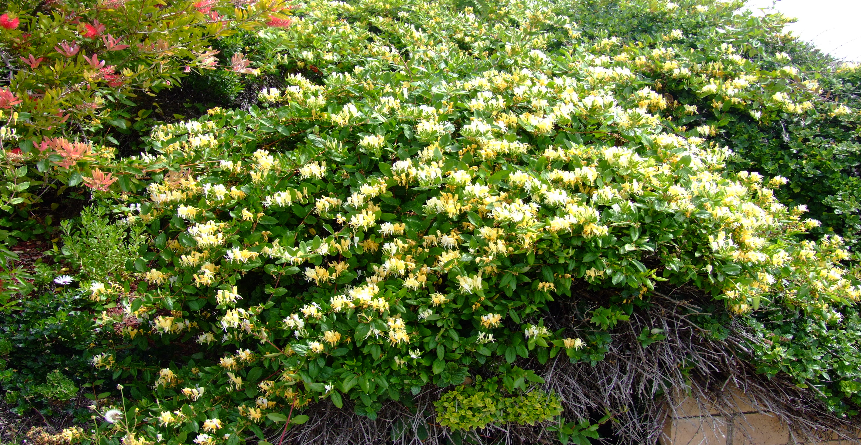