Ground ivy is generally safe. However, it is not recommended in pregnancy or with nursing mothers. Dosage: Historically, ground ivy was given as an infusion of dried herbs (one oz to one pint water). It can also be taken as a tea with wild verbena and lovage in the summer to cool a person down. As a tincture – one part fresh ground ivy to 2 parts 95 proof alcohol, macerated for one month.

1-2 droppers 2-3 times daily. Ground ivy may be picked any time of the year you may happen upon it but is best used medicinally when the flowers are in bloom, usually sometime between April and June. If you are a beer maker, you might like creeping ivy to flavor your beer in place of hops. Dig through a bit of snow in the winter where you know ground ivy grows and you can pick some for to pepper a soup or winter stew. Remember it has a rather strong pungent and bitter mint-like flavor so just a little go a long way in your food. 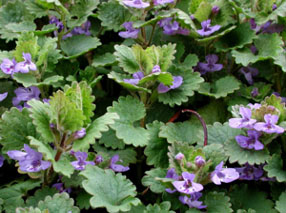 Ground ivy was used in European herbal medicine and it was mentioned in the 1736 London Pharmacopoeia as “mightily used both in the Shops and common Prescriptions” (Woods p. 280). It is native to Europe but was brought to North American by the settlers to use as both herbal medicine and a ground cover. And ground cover it became! Today we find more information on how to obliterate it from our yards than we find on its medicinal properties. It has voracious spreading temperament, taking over just about any area it inhabits. Although is does prefer moist, shady areas you will find it growing in the sun as well. It has almost completely taken over the large sunny spot that two years ago was my vegetable garden and seems content to keep on spreading. Ground ivy is a broadleaf perennial in the mint family that winters over. It has round, scalloped, opposite leaves on a square stem (yes, it’s a mint). When you get a closer look and you will find tiny, dainty purple flowers that usually cluster in groups of three that remind me of an orchid. Their long, deep tubular shape reminds me of their classic use as an ear remedy and how it is able to clear congestion deep in the middle ear.

Ground ivy has long been used for many ear complaints, especially those related to the middle ear or eustachian tube. It is excellent for their ability to help with chronic congestion of the inner ear, particularly when it is related to the common cold. This plant has about 0.06% essential oil. We know essential oils are aromatic and thus they help with dispersing congestion in the body. This helps us to appreciate why it is so efficient at helping congestion in the inner ear. It has also been used to help with humming and ringing of the ear and also for those who have a hard time hearing. When there is a hot, wet cough accompanying a cold, ground ivy can be useful to cool off and dry up the congestion. It has been effective when used as a juice snuffed up the nose for headaches (again, we see its ability to disperse congestion). You could also just stuff the fresh or dried herb up the nose for similar results. Ground ivy has also been used for sciatica. I am impressed by its history of use a heavy metal detoxifier. When lead paint was in use, many painters would take ground ivy as an infusion and they would not get the usual symptoms of heavy metal toxicity. In recent years, herbalists David Winston and Matthew Wood have also experienced this herb’s ability to remove heavy metals in their clients with known toxicity.In herbal tradition, ground ivy has been used as a cancer remedy, especially with heat is bringing the tissue out of balance.

In 2011 a study was conducted on 23 Asian females to evaluate Glechoma’s effect as a depigmenting agent. This was a placebo-controlled eight week study done to women who has been exposed to UV irradiation pigmentation. One week after the pigmentation occurred, women were treated at the sites of pigmentation with 1)1% GE extract lotion, 2) placebo and 3) nothing. The site treated with the GE showed less inflammatory reaction as well as less pigmentation than the other sites. It is believed that GE does not directly inhibit melanogenic activities of melanocytes but that the depigmenting is due to the secretion of pro-inflammatory cytokines and elanogenic paracrine factors. Another study in May 2012 was done to determine the effect Glechoma hederacea extract has on melanogenesis and tryrosinase activity, which is a key enzyme in reducing melanin biosynthesis, due to Glechoma’s antioxidant activity. The results demonstrated that Glechoma strongly downregulated melanin synthesis without producing significant cytotoxicity. Because of its effect on melanin production, Glechoma hederacea extract may be used as an effective skin whitening agent for external use. This study was not done on humans but in a petrie dish. 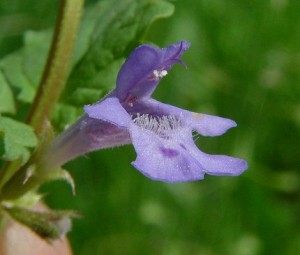